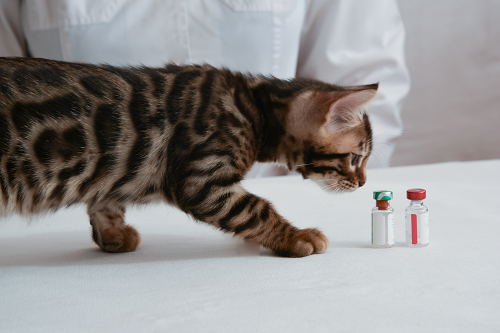 What is a sarcoma?

A sarcoma is a term used to describe a malignant (cancerous) tumor of the connective tissues, which include skin, muscles, bone, cartilage, peritoneum, and blood vessels. Post-vaccination sarcomas in cats usually involve the fibrous connective tissue, so they are called fibrosarcomas.

Why are they called post-vaccination or vaccine-associated sarcomas?

Sarcomas affecting various body tissues have always been seen in cats. In the early 1990s, however, the occurrence of sarcomas at sites commonly used for vaccination, such as the shoulder, lumbar region (lower back), flank (side of the body), and upper hind leg, has led researchers to find out if there was a direct association with vaccination.

It is important to note that sarcomas have been associated with injections of other medications in cats, so the condition is more correctly called an injection-site sarcoma.

Is there an association with vaccination?

"Based on research in North America and Great Britain, it appears that this problem is more common with adjuvanted vaccines..."

The evidence is still not clear, but in some genetically susceptible cats, it seems that components of certain injections may trigger a prolonged and intense inflammatory reaction that can eventually become a sarcoma. Based on research in North America and Great Britain, it appears that this problem is more common with adjuvanted vaccines (containing a substance designed to enhance the immune system’s response to an antigen).

The possibility that sarcomas are caused by something other than a vaccine or a combination of multiple factors is considered the most likely explanation.

How common are post-vaccination sarcomas?

The incidence of sarcomas is extremely small in relation to the number of cats vaccinated. While the exact incidence is unknown, it has been reported to be 1/1000 to 1/10,000 of vaccines injected. 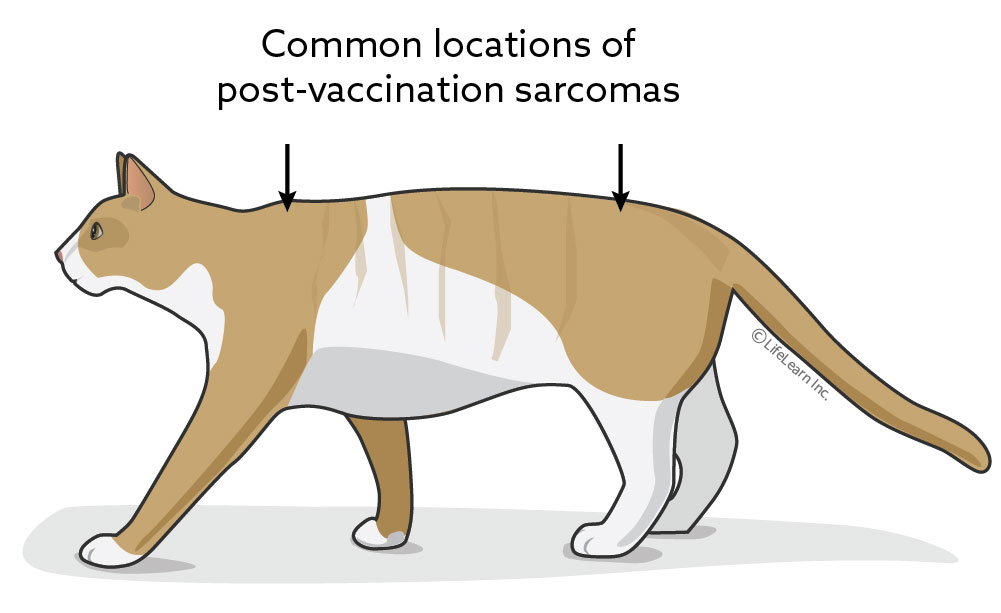 How can post-vaccination sarcomas be recognized?

How are sarcomas diagnosed?

A biopsy of the lump and histopathology (microscopic examination) of the abnormal tissue will confirm whether it is a sarcoma, as opposed to inflammation or infection.

How are post-vaccination sarcomas treated?

"Depending on the size and position of the tumor, amputation of a limb or other tissues may be necessary."

The tumor, as well as a generous amount of tissue around its margins, must be surgically removed to reduce the likelihood of recurrence. Depending on the size and position of the tumor, amputation of a limb or other tissues may be necessary. Post-vaccination sarcomas tend to recur at the original site. Metastasis (spread to other sites) occurs less frequently. The use of radical surgery, in some cases combined with radiation or chemotherapy, increases an affected cat’s survival time.

Is it safe to vaccinate my cat?

Your veterinarian will discuss all aspects of the risks and benefits of vaccination with you. Vaccine manufacturers are actively investigating this concern, and most feline vaccines have adjuvant-free options. In general, the risk of your cat becoming infected with a serious disease is far greater than the very small risk of developing a sarcoma.

© Copyright 2022 LifeLearn Inc. Used and/or modified with permission under license.

View All
Call Us To Make An Appointment Today! Contact Us